Yesterday was a big day for me! Not only did I get to go to NYC kid-less, but I was also lucky enough to go to a taping of the Martha Stewart Show. I am still in shock that I even got to go and that I was literally feet from her. Here's how my day went:
My mother-in-law , sister-in-law, and I left Baltimore by train at 6 am. We arrived in NYC at around 9 am. I should point out, that I grew up in Hyde park, NY which is about 1 1/2 north of the city. I miss the city a lot!! Anyway, we walked around for a bit while waiting for my aunt to arrive. We then headed down to W. 26th street to the studio where Martha is filmed, and got in line with a bunch of other excited women who were waiting for their tickets as well. Although, now that I think of it, I was much more excited. I am such a nerd! So, shortly after this, a nice young girl came out, took our names and gave us a ticket. It was so simple! We then had to be back an hr and a half later to go into the studio, so we went down the street for brunch. At 12:30 we went got in line, went through security, and enjoyed yummy chocolate chip cookies while filling out questionaires. By this point, I was so anxious to just get up to the studio. I couldnt wait for the show to start taping!
Then, we were all called into the studio and started filing in. There were about 5 different people directing us to our places. Somehow, we were seated right on the floor, eventhough there were plenty of other people there before us. My sister -in-law and I were right in the front row, next to where the greenhouse is on the set. 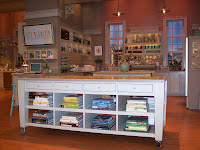 They go through a whole lot of directions with the audience, how to clap, when to clap, etc. Then the warm up guy, Joey, entertains for a while, until it is time for Martha to come out. This is the staff preparing the swaps outs for the food. I wish this wasn't so blurry! 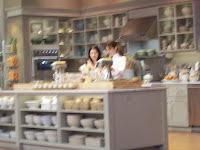 Then they say... 10 seconds to go...ahh.. my heart starting racing, I turned bright red... I couldn't believe she was going to be right in front of me! It was so surreal, like watching it on tv, only we were actually there! 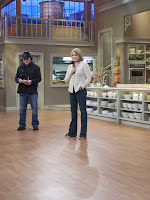 I must say, Ms. Martha is amazing at what she does. She only made one mistake the entire hour. Can you imagine that? She was also very funny and prettier and skinnier in person. My sister-in-law and I were staring at her very long, skinny legs through the whole show! We didn't get to meet her, but it was just as amazing to be at the show. I'll have to write more about the actually show later, it has taken me so long just to write this post.
Posted by Katie Jean at 12:14 PM

Oh man, that would be exciting! We don't get her show on television here anymore, so I am forced to try and watch it on the internet. (Which is so not fun!)

Wow, looks like fun! Lucky you, with no kids tagging along. Thanks for the nice comments on my blog. Looks like you have some adorable creations, too! Love the cluth purses, etc......fun, fun, fun! Keep it up!!!!

In your picture of her she even looks younger and thinner. Not to mention, I think she copied _MY_ idea for zinc kitchen counter tops! How dare she! (haa, haa!). Sounds like you had a great time!

Oh wow! I am so envious. How very cool that must have been! If I ever get to go to NYC again (my first trip was last Nov) I am DEFINITELY going to try to see her show. I'm a Martha groupie. :)Sounds like you had a fabulous time!