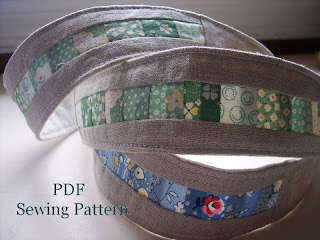 Ok, time for some shameless self promotion! I just finished up my latest pattern, the Patchwork and Linen Headband and it's now available in my etsy shop. I have loved making these for a long time now. I started making them for my first craft fair over three years ago and they always seem to do well. Now you can make your own and they are pretty simple and fun to make. 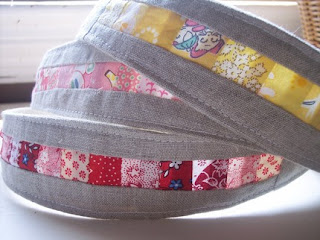 To celebrate it's release (and some other good news!!), I'll be giving away a copy of each of my three patterns I have available. Just leave a comment and I'll pick a winner on Monday. You can receive extra entries for either blogging or tweeting about it (just include @seekatiesew in your tweet). If you already own the patterns, feel free to enter and I'll send you another prize.

You may remember just two posts ago when I showed this doll quilt top. Well turns out it was a quilting nightmare. First it took me forever to decide how exactly I was going to quilt it. When I finally decided, I went with a "handstitch" stitch on my sewing machine, using metallic thread. I should have know that it was probably not a good idea to A. use metallic thread for the first time and B. to use a stitch I hadn't used before. Needless to say it was a frustrating process.

Luckily the same day a huge box of Denyse Schmidt's Hope Valley arrived. I realized it would be perfect for my partner and feed my urge to cut into the new fabric. I honestly didn't think I liked this new line of fabric that much, but let me tell you, I'm absolutely in love with it. It is so gorgeous in person.

The inspiration for the doll quilt also came from Denyse, her new pattern, Cog + Wheel. I don't actually have the pattern so I just drew it out on graph paper. It worked out pretty well although probably not as neat as it would have been had I used the pattern. I used linen as the background fabric which I think compliments this line of fabric wonderfully.

When it came to quilt I had a few problems with the linen. It shifted a lot as I was quilting and I had to stop and readjust a few times. This is the first time I've ever really quilted with linen and I almost broke up with linen today. Almost. I'm glad I perservered though because I really, really love this quilt. I hope my partner like it too!

Oh and speaking of linen and patchwork, I'll be releasing a new pattern tomorrow and having a giveaway, so be sure to stop back!
Posted by Katie Jean at 7:39 PM 7 comments:

My little boy turned 4 on Saturday and we had a robot themed party for him. Over the summer (or fall, can't remember), I found a bunch of robot party supplies on sale at target and just snatched them up. I spent our snowed in week dreaming up of robot themed ideas and had so much fun. Thursday night I stumbled up this blog post and decided that I needed to make a robot pinata. I'm glad it came out so great because I was really kicking myself Friday night for starting that project.

I also find the cake idea at cookie magazine although Isaiah requested a blue robot, so we went with that instead. It came out looking a little purple, but he didn't mind. I made this cake from Smitten Kitchen and topped it with Swiss Meringue buttercream. It was sooo delicious and surprisingly pretty easy. Although I should mention that I made a batch of buttercream on Friday night using Martha's recipe from her baking book and it did not come out well, so I had to make another batch (this time using the SK recipe) on Saturday morning. I learned what worked best for me was to continue using the whisk attachment on the kitchenaid instead of switching to the paddle attachment like Martha suggested.

I also placed all the food in tin foil containers and put snacks for the kids in muffin tins. It was really cute but of course I forgot to take pictures of it.

My sister also made a pin the heart on the robot game but the kids were so busy playing that they didn't want to do it. It didn't all go to waste though because the adults were all good sports and we played instead. Of course I don't have a picture of this either, so I'll have to see if someone else got one.

All in all, it was a great time. It's so fun being the mama to this sweet boy and getting to watch him grow. I am also so thankful that John was able to be here for another one of his birthdays. He was in the hospital Friday during the day and went back in on Sunday, so the fact that he was able to be there with us was amazing. And as an aside to that, thank you again for all your words & prayers for John and I. We really appreciate your support!
Posted by Katie Jean at 4:19 PM 8 comments:

First off, you guys are the best. Thanks for the words of encouragement & prayers. I'm happy to say John is home and is feeling a lot better. It's good to see him having a little energy. Hopefully it'll continue to go that way.

We're now in the middle of our second major storm of this month. I'm pretty sure there's about another foot of snow and more coming down as I type. While I am starting to really feel the cabin fever, it is nice to have an excuse to bake and sew. This morning I finished the top for my Doll Quilt Swap. I'm still deciding on what binding to use and how to quilt it. Any suggestions? I'm sort of leaning towards not using a binding. I wish I had a bigger of piece of the FMF gray seeds because that would probably look good, but I don't, so I'll have to think of something else.

Alright, back to watching "Cars" with Isaiah. I'm pretty sure this about the 100th time I've watched it. At least it's better than Thomas ;)
Posted by Katie Jean at 3:20 PM 3 comments:

Unless you live in a hole, I'm sure you've heard about the huge storm that swept across the mid-Atlantic region. At the storm's end, we had close to 3 ft of wet, heavy, snow. It was certainly beautiful but being stuck in the house 4 days in a row is starting to get old. Now we're bracing for another storm, not quite as big, but more snow nonetheless. Our area is just not prepared for this kind of weather and I'm not sure if our road is ever going to be cleared! But we're trying to make the best of it. Lots of baking, cocoa making, snow playing and of course sewing. I finished up this block for Valerie yesterday. I really, really love how it came out. I'm sure she's going to have a really awesome quilt by the end.

I've also debated how much to share about John's current situation, but I think that we could really use some extra prayers. For the past two weeks he was in the hospital with pneumonia, which thankfully he recovered from, but then they decided to place a feeding tube in since he was having a hard time eating and was losing a lot of weight. They discharged him from the hospital on Thursday night, right before the snow storm hit. I was hoping and praying that he'd be ok because I couldn't imagine having to get him to the hospital. He made it through ok, but was starting to feel really lightheaded on Sunday. Yesterday he had a follow up appointment and they ended up admitting him overnight because he blood pressure was very low and he was severely dehydrated. He's feeling a lot better today and he will probably get discharged again, but with this next storm I'm just hoping he remains stable. So if you're the praying type, we'd appreciate any extra prayers you could send our way. Thank you in advance!
Posted by Katie Jean at 10:23 AM 16 comments: