Yup, another trip to the thrift store. Lately I've been finding that going later in the week is when I find the best stuff. This could perhaps been a tip for some of you thrifters. Maybe it's not true for all thrift stores though. Here's my theory. On the weekend, my favorite thrift store is so packed that a lot of times you can barely get down the clothing aisles because people are trying on clothes and have their carts parked right in the middle (which is completely annoying). Anyway, every Monday is 25% off which makes it even harder to get around. I don't particularly like going on Mondays because it's almost impossible to find a cart. That means I either have to let Isaiah walk around and pull everything off shelves, or carry him around, which is not easy seeing as he weighs 25 pounds. Basically over these three days, everything can be very picked over, even though they are constantly putting new things out while you're there. I think going later in the week means they have had more time to put new things out and less shopping traffic. I suppose that's a little thrift math. More things, less people, better luck thrifting.

K, anyway, I didn't find any sheets or table clothes yesterday. I'm sure you are all sick of seeing those. But, I did find these really cool napkins. 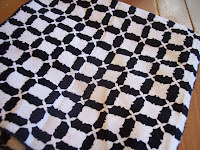 I wish they had more of them though. Only 2! 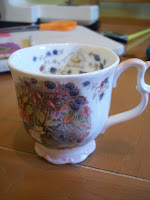 A Royal Dalton teacup. I'll probably sell this on ebay, although I'm not sure what it's worth. I only paid like 80 cents for it, so I won't lose anything on it. Then there were these cute band books. I just love these little guys. 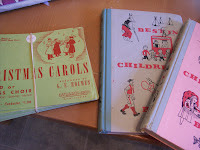 I also picked up 2 old children's books. There are some really cute illustrations that go along with the stories. And I just found this picture in here. 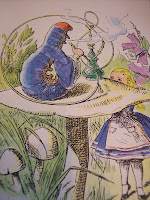 Look closer. Yeah, that's a caterpillar smoking a hookah. What's in that hookah, Mr. Caterpillar?
I'm thinking about using these for some kind of collage. Not that I collage a lot, but I think I need a Mod Podge fix. Call me crazy. Oh yeah, Zippers and this pack of Folk Art Clothing Emroidery patterns. It's interesting to say the least. 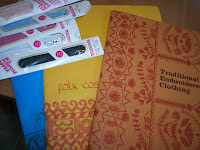 Let's see what else...hmm.. oh yeah, there will be more sheet fabric packs up on etsy today. I'm only listing 4, but if they sell, I might be able to do some more. K that's all for me today. Did you make it down to the end of the page??
Posted by Katie Jean at 8:13 AM

What a successful trip you had! I don't think I have the proper eye, you are much like my sister (Rebecca at Thrifty Goodness). She can see relatively ordinary things and see how great they can be. I, on the other hand, normally end up with more practical items.

What great finds! I love those napkins:)

I don't see any sheets (unless you're hiding them!!!) great thrifting, as always. I love the books.

Do you by chance go to a Unique Thrift Store? That's my favorite here, and it has 25% off on Mondays too. I rarely go on Mondays because it is so crowded! And the 50% off days--forget about it! I'd rather pay full price than fight to get a cart or get run into by all the unsupervised children running through the store.

I agree with your theory on going later in the week. I think lots of people shop on the weekends and Monday so it gets really picked over. By about Wednesday or Thursday it has started to recover. I think I may just pop in today myself! :)

i would love to see some of those embroidery patterns! nice haul as always!

Hey, looks like you've scooped up some pretty fabulous treasures!

I haven't gone thrifting lately. I think it's time to go before the kids are home for the summer.

Well, like I said, you are the thrift goddess.
Those children's books must have been written before we became politically correct about EVERYTHING. It's too funny.

I just picked up a folk art book a couple of weeks ago too. It has some inspiring artwork in there that I thought would make good embroidery designs. But where did I put it?