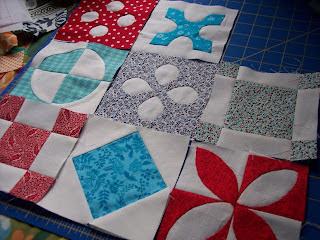 John went back to work today after having a week off. I wish I could say I had been more productive when I had the extra set of hands, but instead I lazed around. Oddly enough, this morning I was up early, made a to-go breakfast for John, cleaned up the living room and got a start on our piles of laundry. I guess it has something to do with everyday routine.

I did have a little panic attack when I realized that my upcoming craft show is less than two weeks away. I really wanted to get a lot of things done while John was home, but it just didn't happen. Now it will be crunch time and I'm hoping to have enough for the show. The last one I did was only one day, but this one is two days! Yikes.

Meanwhile, I did finish my blocks for the Dear Baby Jane project. Some of them are a little wonky, but I am liking how they are coming out. Hopefully I can keep up with making these! I'm wondering how long it's going to take to put together though ;) 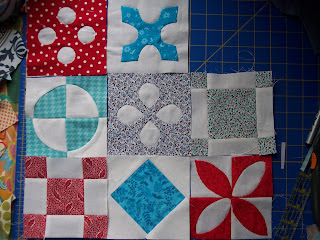 That quilt is looking nice, Katie! I know what you mean about getting less done than you'd like. My weekend was not nearly as productive as I'd hoped so I, too, will be crunching it this week.

Routine is what motivates us. When my husband is at home, I tend to lounge around with him too. I love your quilt. It is beautiful.

I love, love, love your quilt blocks! They are adorable and amazing. Your quilt is going to be beautiful!

And I do the same thing when Ryan is home - lots of plans to get things done, but all I really want to do is hang out with him and the boys.

The blocks turned out great, you are so talented. What an excellent skill you have.

Your blocks look fantastic! I never get anything done when Daryl is on break. I need my routine.

These are so pretty! I'll be on you so you won't be falling behind, trust me. :-)
As for putting it together, I'm seriously contemplating adding at least one side's sashing to each block right now. And definitely assembling rows as they're done.

What a delightful quilt :)

These look lovely! Good luck with getting everything done!

Your blocks look beautiful. It's so cool seeing them all lined up like that.

I have the same problem-- big plans when husband is home, but then I end up just lounging about instead. It's definitely more fun to lounge about when one has a buddy. Makes it tougher for me to get stuff done. :)

Love your choice of colors! It is almost tempting to start a project like this!