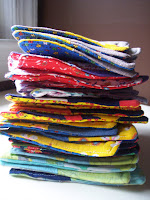 There has been a lot of sewing going on around here lately, but not a whole lot of completed projects to show. My mind seems to be jumping all over the place, so I'll start one project and then have to start another one right when I'm thinking of it. It is throwing me into a little panic because I'm doing a craft fair in 2.5 weeks. I seriously must be crazy. The other day, while I was sitting at my sewing machine, I happened to look under a table a noticed this quilt top that I thrifted over a year ago. It had been pushed aside, forgotten about, probably just like it had been when it found its way to the thrift store. But at that moment, I had a plan for it, and begin cutting out squares from its nine patches. I was amazed at how suddenly, after a year, there was inspiration for this quilt top. Now it's not anything magnificent, but they eventually became coasters. This was the perfect project for the quilt top. 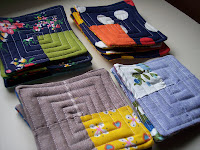 It had all been handsewn, so there was a lot of tearing and some stains that I had to cut around. The whole time I was wondering about the person who had begun this project but never finished. I'd like to imagine a younger girl learning from her grandmother. The stitches were large and uneven, but in some places smaller or on top of the larger stitches. In any case, I hope the person who had started this project would be smiling about me giving it new life. However simple it may be.
Posted by Katie Jean at 8:41 AM

love the coasters. Sometimes I buy something, and then try to use it up right away. it is nice to have inspiration after a year. i think that is the best way to do it.....let it talk to you for a while, then decide on the project.

Sometimes inherited projects can be the most fun :)

oh how nice you were able to use it such a long time after you bought it and make something so cute!