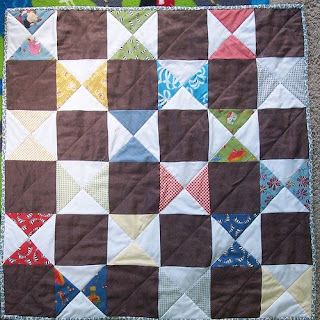 A while back, I fell in love with this "Broken Dishes" quilt by Crazymomquilts. I had wanted to make one, but like so many times before, I got sidetracked. Then while browsing flickr, I noticed Erin from House on Hill Road had made one too. She used a charm pack, and I remembered that I had one stashed away too. Quickly, I began working on it, sewing together all the triangles. I had planned to give this quilt as a gift in July. Eventually it was pushed aside, in favor of other projects, until I saw JCHandmade's sneak peak of her quilt last week. (and who has coincidentally blogged about it today!!) 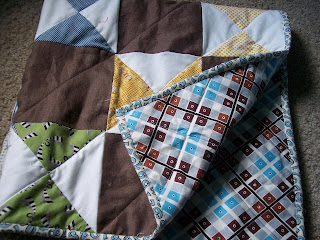 I was instantly inspired to use some dark brown linen for the squares. It worked out well for two reasons: 1. I had run out of my remaining charm squares and 2. It was seriously quick. I was able to finish up the quilt in a matter of hours and managed to hand sew the binding on during the Redskins win yesterday. Isaiah was a little disappointed that it wasn't for him. I guess I'll be making him another quilt in the near future. 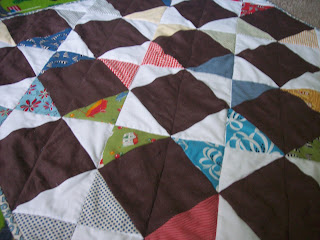 I'm SO AFRAID of attempting a quilt. I'm very impressed. :)

Your blog is so cute!
I found you through the busy bee swap!
cute, cute cute!

It turned out great! I used the broken dishes pattern for my daughter's quilt....it's amazing how different yours looks with the brown squares added in.
My sheet squares arrived too (last week I sheepishly admit) and I love them!!! Thanks for hosting:)

Cute, Katie. I, too, need to get over my fear of quilting (like Karyn) and finish the quilt top I finished last summer ... a year ago.

Oh, this is so nice!

this is beautiful! i love the colors... the dark brown squares are just perfect to set it all off.
xo

oh, i love it!
look at you churning the Fo's out!

I love it Katie! The giftee will love it too, I'm sure.

Good luck on your sewing for the craft fair. Another reason why it was good to buy the new machine when you did? :)

This is super cute! I love this style. Hopefully I'll get around to making one soon.