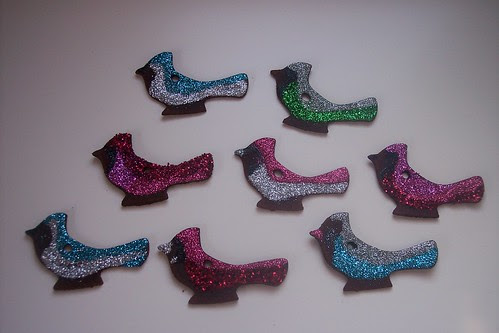 Wow! Look at this. Posting two days in a row. Craziness I tell you. I spent the last two days working on my ornaments for the Freshlyblended Ornament Swap. This is my third year in the swap and it's always so much fun. It's so hard to decide what to make though, especially when Martha has so many great ideas. In the end I went with the cinnamon bird ornaments. I needed something that I could make several of and that would ship flat. The first year I made cardboard houses that took forever and were hard to ship. I learned my lesson. I'm happy with how these little birds came out. I didn't mess with the template the instructions had but instead used a bird cookie cutter I had on hand. The dough was pretty easy to work with. I just mixed it up in a ziplock bag and let it rest until it was ready to be rolled out. I let them dry overnight but it didn't really work, so I ended up putting them in the oven for a few hours. I'm starting to get sick of the cinnamon smell which I never thought was possible. The recipe made about 22 birds which is nice because now I have some to tie to Christmas gifts. Speaking of, I really need to get the Advent calendar down before Isaiah gets home from school. What are you guys putting in your Advent calendars? I need some ideas!
Posted by Katie Jean at 9:45 AM

Very sweet. I love the smell of cinnaomon, but suppose one could get tired of it.

I am in an ormanent exchange too, mailing all of mine off today!! I bought the Fisher Price Little People Nativty, I will be using some of the animals and people for our advent this year in addition to candy, verses, a toy here and there for other days,...I bought some draw string bags and some iron on numbers for the 25 day count down!! HMMMM maybe I should blog about it! :)

these are so adorable...i love birds!