I'm admittedly out of sorts this week. I've had days of great productivity, followed by some that included a lot of sitting around. Which wouldn't be entirely bad if it weren't the beginning of a week. I think that most of this is due in part to the fact that John has his scans on Thursday. It's definitely weighing heavily on my mind, so I'm just trying not to think about it. I know deep down we'll get good news, but there's always those "what ifs." Ugh, a few more days and it'll be all over.

Anyway, on Sunday I had the house to my self for the entire day. This place was a mess and I spent a good part of it cleaning, sorting, organizing, and finishing laundry. Of course now it looks as though I had never touched the place. But at least I know I cleaned. I also went to see Juno. By myself. Which is a big thing for me. I've never done that before and it took quite a bit of convincing myself to even do it. And I'm glad I did. It was a great movie and I really enjoyed relaxing in our new movie theater down the street! 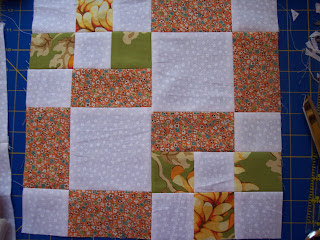 Today I finally started playing catch up for the quilt a long. I did the first block a while ago, probably when Amanda first posted it (and I've since misplaced it). This afternoon (even with Isaiah unexpected short nap grr), I was able to finish the second and third one. Hopefully tonight I'll be able to do a few more. 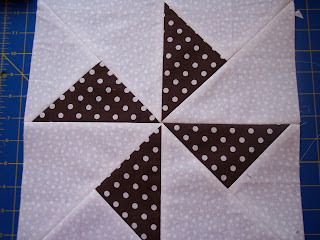 Sounds like you had a great day to yourself! Juno is on my list to see; just waiting for it to hit the dollar theater (why, yes, I am cheap!).

First of all, good for you for taking yourself to a movie, I've heard Juno is really great!

And...your blocks look super! Mine would be all crooked and wonky, THAT'S why I don't quilt :)

A day to yourself? Wow! How does one go about getting one of those? :-)

I hope everything goes well on Thursday! Just do what you have to do to make it in the meantime. Your quilts are looking great!

your quilt looks so great! john will be in my prayers! i am glad you got a day to yourself. it sound slike a nice one!

Yay! Good for you. I love the fabrics.
Good luck to John. I know lots of people will be thinking of you.